月蝕 (Gesshoku) was Kyo's first band. They formed in August 1993 and disbanded on April 11, 1994, after an activity period of only nine months. The band name means "Lunar Eclipse" and was often used together with the tagline "schwarz weiß" (German for "black white"). 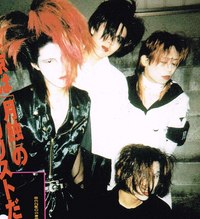 The member history of Gesshoku isn't entirely clear. It seems that except for the vocalist, all positions changed once. However, guitarist Shuji and drummer Shura haven't been mentioned in any published material and are only known from conversations with Seine (ex-Viṣṇu / Masquerade).

Much like Gesshoku's member history, the order of their releases isn't entirely clear either. Furthermore, it's impossible to say if these releases are all real, especially those without a line-up might be bootlegged.

Note: On various websites, the songs 絶望の箱 (Zetsubō no Hako) and "Think about death" are said to be from this band. That's not the case, they were released by a different band with the same name.