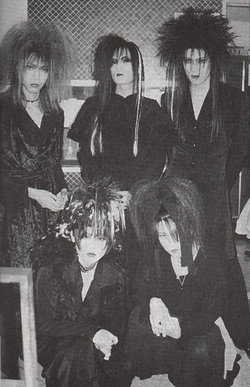 La:Sadie's after their last live. 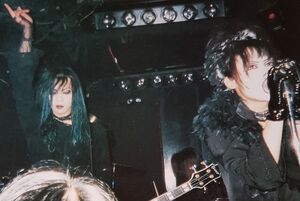 Dir En Grey at their first live as DEATHMASK.

The exact date was provided in the magazine Dir en greyやろうぜ (Dir en grey Yarōze) in 1999. The band name is a combination of the German word "dir", French "en" and English "grey" and, according to an interview in Apres Guerre #19 (March 1997), was thought to mean "Grey Silver Coin" (灰色の銀貨 (Haiiro no Ginka)). It was supposed to convey a music and an image that wasn't caught by neither black nor white, so they picked "grey".

The band took their name from a song on a demo tape released in 1995 by the visual-kei band Lareine. The song is called "Dir en gray" and opens with the line 灰色のあなたに dir en gray (Haiiro no anata ni dir en gray), which both means "To you in gray" and would actually fit the intended meaning of the words, as opposed to "Grey Silver Coin". In the aforementioned interview, Kyo mentions that he knew the phrase before and during a live from Lareine's former vocalist Kamijo in 2015, Shinya explained that they took the band name from the song name and simply changed the letter "a" to "e".[4] This was further corroborated by Kaoru in the WOWOW Special interview in 2020, where he explained that they took the name from the song of a band that was famous at that time. Why Dir En Grey thought that "dir" means "silver coin" remains unclear, but they would later become aware of their mistake.

In turn, Lareine got the name "Dir en gray" from a band called Dir & Gray, a visual-kei band that was active around 1991. The original meaning behind the name was "dill of grey colour" (dill is usually white) and was coined by guitarist SHOW. Interestingly, their name was written with the same Katakana as Dir En Grey, ディル・アン・グレイ, even though "and" would be written as アンド (ando) in Japanese.

According to an interview in Shellruby #1 (1998), the band had around 20 possible names and decided on "Dir En Grey" at a family restaurant. At first, Kyo and Toshiya didn't like it, they thought it sounded uncool and too similar to "GLAY". According to Toshiya on the radio show Nack5 FM Triangle Super Audition, one of the other names the members had in mind was "如月 (Kisaragi)". It was the name of one of Toshiya's high school bands. On The Freedom of Expression, Kaoru mentioned that the alternate band name was a two-kanji word. According to Kyo in the aforementioned WOWOW Special interview, they narrowed it down to two names, with three people voting for "Dir En Grey" and Kyo and one other member voting for the other name. 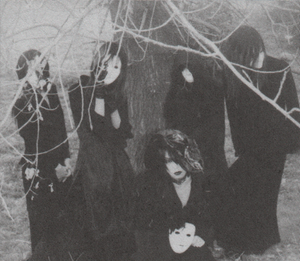 In March 1997, Dir En Grey joined their friends in 覇叉羅 on their tour, performing their first live as Dir En Grey on March 31.

In April 1997, the tour with 覇叉羅 continues. Later, Dir En Grey performs a secret live at an event at 川崎CLUB CITTA'. According to Kaoru in Shellruby #1 (1998), the band had created five or six songs by April 28, 1997, four or five of them being on MISSA. Three of these songs were 「S」, Erode and 秒「」深, which have been performed as early as April 1, as well as GARDEN, which was performed on April 24. The other songs might have been 蒼い月 and 業, which were also performed on April 1. However, it's unclear if Kaoru meant either of them as they had already been recorded in February. The last song was most likely 惨劇の夜, which would be included on MISSA as 霧と繭. In an interview in ARENA37°C (February 1999), Kaoru mentions that 新曲1 was already being written in April as well, but only debuted at their formation live in May. 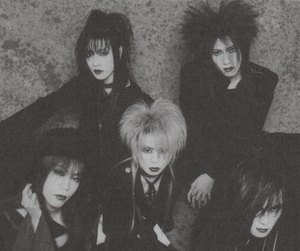 In May 1997, Dir En Grey officially made their live debut. According to Kaoru in Shellruby #1 (1998), they recorded their debut EP MISSA in the first ten or so days of May and created four or five new songs until their debut live. Two of those were most likely 刹那 and 新曲1. According to Toshiya in the same magazine, they spent three nights in the studio.

In June 1997, Dir En Grey only played three shows, one of them a secret live at an event. At each of the other two shows, they distributed a special message tape. 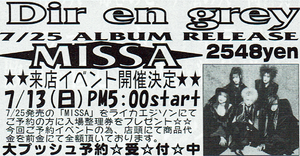 An ad for the instore event on July 13.

In July 1997, Dir En Grey released their debut EP MISSA in Japan. They also appeared on various TV shows, at instore events and participated in the SHOCK WAVE'97 Vol.2 tour. The live on July 26 was postponed due to a typhoon.

In September 1997, Dir En Grey continued the tours they had begun a month earlier. They also played on the EXPERIENCE EYES'97 event. Most notable is the show on September 15, one of the shows where they performed with and covers of other bands.