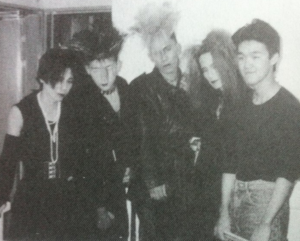 DIE:STERIA was Kaoru's first band. They likely formed during his second year in high-school, as early as April 1990, and likely disbanded when the members graduated around March 1992. However, both the time of formation as well as the time of disbandment are not entirely clear. They might have already formed towards the end of Kaoru's first year in high-school and disbanded around a year after he graduated.

In his book Dokugen, Kaoru explains that he decided on the name "DIE:STERIA" because he thought that it was cool when a band name began with a D and included a colon. He also says that they had only one original song, but did not record it. They covered songs by X, BOØWY, かまいたち, ZI:KILL and D'ERLANGER and performed at their high school's culture festival in third year (as early as April 1991).