La:Sadie's (ラサディース) was the direct predecessor band of Dir En Grey. The band name was supposed to mean "sadness" and their tagline was …腐乱ナ君ニ 愛シスギタ僕 月ト闇ガヒトツニナル瞬間… (…Furan na Kimi ni Itoshi Sugita Boku Tsuki to Yami Hitotsu ni Naru Shunkan…), which means "…The Rotten You I Became Obsessed With When the Moon and Darkness Become One…".

La:Sadie's was formed by vocalist Kyo and bassist Kisaki in early November 1995. This is evident by the band name already being present on a 廃人黒薔薇族 flyer from before November 21. Kisaki then invited guitarist 紫緒 (Shio) and drummer Shinya; after a short period as a four-piece band, second guitarist Die was invited by Kyo to complete the band's line-up. On the band's first flyer, distributed on December 3, the band name and Kyo's name and position are revealed, the other names are marked with three question marks.

La:Sadie's made their live debut on January 14, 1996, which is since considered to be their official date of formation. Shio seceded after their third live on February 15 and on the same day, Kaoru was invited, whom Kyo had already met on December 24, 1995. His first official live with the band was on April 13, although they already performed with him at a secret live on April 5. On August 20, Toshiya came to watch their live at CLUB GIO and afterwards, spoke to some of the members. When their bands performed at the same live in Nagano two days later, Kyo asked Toshiya if he would be open to forming a band with him. According to Toshiya, there were already rumours of La:Sadie's coming to an end around this time. In a more recent YouTube video, Shinya confirmed that La:Sadie's had already decided to disband in summer of 1996.

These rumours would later turn into reality, as La:Sadie's announced their disbandment on December 20, 1996. After a very successful independent career and over 80 lives in one year of activity, they disbanded on January 15, 1997. The reason for the disbandment isn't known, but it's commonly believed that it came from a disagreement between Kisaki, who wanted to stay independent, and the rest of the band, who wanted to sign to a major label. While Kisaki would go on to form MIRAGE, the other members were joined by Toshiya to perform as the Kuroyume cover-band DEATHMASK on January 24 and officially form Dir En Grey on February 2, 1997. 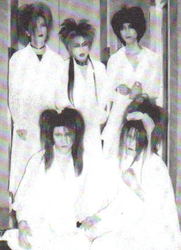 La:Sadie's after their first live. 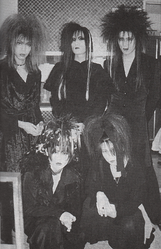 La:Sadie's after their last live.

In the band's one year of activity, they produced a total of nine releases – seven demo tapes and two 8cm singles. They also appeared on an omnibus tape with three other bands. They had eleven songs with unique names, as well as one untitled song that was only performed at lives.
Interestingly, this website lists four additional song titles: 残像… (Zanzō…), which was supposedly an early version of 残-ZAN-, 刹那 (Setsuna), similarly an early version of 刹那, 鏡死 (Kyōshi) and 刺ノ刻 (Toge no Koku), the last one being the aforementioned untitled song. However, there's no way to verify this information, it's only provided for posterity's sake.
Additionally, various DVDs with live footage have been sold by Kisaki over the past decades. The live footage of the August 29, 1996 live is commonly known as the band's last live. However, this is not true. You can watch it here.